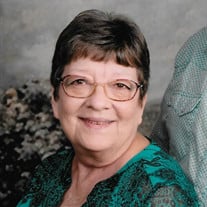 Connie L. Beecham 65 Columbus, KS passed peacefully January 11, 2021 after a short illness with her husband, Ronald J. Beecham, standing by her side. She was born to Marvin and Bettie Draeger in Columbus, KS. She lived most of her life in Columbus with only a few years spent in Joplin and Carl Junction, MO. She graduated from Columbus High School in 1973. Shortly after high school, she married Ronald J. Beecham. They had two children, crystal Beecham Beal and Robert James "Buddy" Beecham. In 1976 she and Ron joined her parents in farming, while she held several jobs during this time, her main focus was raising her children and helping run the family farm. She also was an assistant Girl Scout Leader for her daughter’s troop 850. She enjoyed working alongside her daughter in the Girl Scout kitchen during the fair. In 1984 she help organize and was a Charter member of the west Mineral Eagles 918 Women's Auxiliary. As a member, she was an Eagle Doll, working in the Kitchen on Friday nights, bartended, and help with many events. One of her favorite events was the free fishing tournament where the motto was spend a day with your kids fishing. Connie always enjoyed children and cooking which lead to her career of 19 years with the Columbus School district as a cook and janitor. Later, she worked at Quapaw casino as a cook. Another pass time that she enjoyed was watching her grand-children and great-grandchildren grow and she began scrapbooking for them. She was baptized at Faulkner Christian Church many years ago, but she and Ron recently became members of Friendship Friends Church in Hallowell, KS. She is survived by her husband: Ronald J. Beecham of Columbus, her daughter: Crystal Beecham Beal and husband Robert F. Beal, JR of Commerce, TX; their children: Darren James Beal, Megan Desiree Beal Bellamy, her husband Jeremy w. Bellamy, their children: Zepplin James and Hendrix Layne Bellamy, all of Commerce, TX; her mother, Bettie Draeger, of Carthage, MO, sister, Martha Eiken and her husband Don, of Carthage, MO, Brother in Laws: Ralph Beecham, wife Dorian, of Kimberling City, MO, John P. Crane, SR of Phoenix, AZ, sister in Laws: Linda Beecham, of Phoenix, AZ, Becky Beecham, of Webb City, MO, and Connie Egbert and her husband Danny of McCune, KS. She is also survived by several nieces, nephews, great nieces and nephews, and one special nephew, Rick Brosseau. She is preceded in death by her father, Marvin Draeger, and son Robert James "Buddy" Beecham. Services will be at 2pm, Friday at Bath Naylor Funeral Home, Columbus, KS with Tony McCord officiating. Final burial will be at Greenlawn Cemetery. Friends may come by the funeral home on Friday from 9 am until service time. In Lieu of flowers, the family requests that donations be made to Cancer Society of America for small cell lung cancer research. Condolences may be left at www.bathnaylor.com. Paul Bearers will be: Josh Beecham, Rick Brosseau, Denzel Davis, Nathan Egbert, Brian Garrett, and James Minor.

Connie L. Beecham 65 Columbus, KS passed peacefully January 11, 2021 after a short illness with her husband, Ronald J. Beecham, standing by her side. She was born to Marvin and Bettie Draeger in Columbus, KS. She lived most of her life in Columbus... View Obituary & Service Information

The family of Connie L. Beecham created this Life Tributes page to make it easy to share your memories.

Send flowers to the Beecham family.