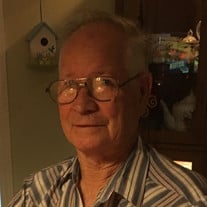 Cleo LeRoy Mills 85, of Girard, KS died 4:45am Saturday October 5, 2019 at his home following an illness. Cleo was born October 6, 1933 in Southwest City, MO to Clifton and Lillian (Parrish) Mills. Cleo grew up in North Miami, Oklahoma and has been a longtime resident of Southeast Kansas. Cleo was a Veteran of the United States Army retiring with the rank of Staff Sergeant serving from 1954-1974. On October 28, 1980 Cleo married Judy K. Graham in Miami, OK; she survives at the home. Cleo owned and operated Everything Automotive Machine Shop in Pittsburg, KS and was known as an expert machinist. Cleo was a member of the Church of Christ in Pittsburg, KS. He loved fishing, woodworking and enjoyed making furniture for his family. He will be most remembered however for his love of family. Survivors include his wife; children Vicki O’Brien of Pittsburg, KS, Michael Mills and wife Karlene of Michigan, Bill Eller and wife Christy of Pittsburg, KS, Doug Eller and wife Paula of Pittsburg, KS, Charles Eller of Topeka, KS, Tammy Simon and husband Ben of Girard, KS and Michelle Mullinix and husband Clayton of Burlingame, KS; brother Jerry Mills of Arma, KS; many grandchildren and great-grandchildren. Cleo was preceded in death by daughter Debra Tindell, parents, 2 sisters and 4 brothers. Funeral Services will be 6:00pm Tuesday October 8, 2019 at the Bath-Naylor Funeral Home with Minister Allen Fischgrabe officiating. Burial will be at a later date at the Ft. Scott National Cemetery. Friends may call the funeral home after 12:00pm Tuesday. In lieu of flowers the family asks expressions of sympathy to be in the form of memorials to the Avalon Hospice. Friends may drop off or mail memorials to the Bath-Naylor Funeral Home 522 S. Broadway Pittsburg, KS 66762. Condolences may be left at www.bathnaylor.com. Arrangements are by Bath-Naylor Funeral Home Pittsburg, KS.

The family of Cleo LeRoy Mills created this Life Tributes page to make it easy to share your memories.

Send flowers to the Mills family.