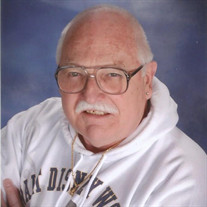 Clarence Melvin “Mel” Anderson 78, of Frontenac, KS died 10:57pm Wednesday August 18, 2021 at the Via Christi Village in Pittsburg, KS following an illness. Mel was born February 21, 1943 in Ft. Scott, KS the son of Donald and Ruby (Sharp) Anderson. Mel moved to Southern California at the age of three where he attended public schools. The family moved to Anaheim, CA where he became a fan of Walt Disney. At age 15 he moved to rural Ft. Scott, KS to live with his grandparents, Claude and Dena Sharp. He attended Uniontown Rural High School and graduated with the class of 1960. He then attended Ft. Scott Junior College majoring in Journalism. He was employed by the Ft. Scott Tribune as a reporter/photographer from 1961-1962. He joined the Western Insurance Companies in Ft. Scott, KS in 1962. In 1965 he enlisted in the U.S. Navy. Upon successful completion of Navy Photo School at Pensacola, FL he was assigned to N.A.S. Oak Harbor, WA for duty. While there he was assigned to be official photographer for the Admiral of the 12th Naval District. In 1968 he was deployed to serve in Vietnam. When he returned he was assigned to N.A.S. Alaneda, CA where he completed his enlistment. He was honorably discharged in August of 1969 having achieved the rank of Photographers Mate First Class. Following dischare he returned to Ft. Scott to Western Insurance where he met and married Joyce Elaine Gorentz in October 1970. He left Western Insurance in 1972 to pursue an undergraduate degree in accounting at Pittsburg State University. He was awarded a BSBA Degree in 1974. He subsequently earned an MBA Degree from PSU in 1977. In 1993 he completed a degree in Elementary Education from PSU and accepted a position to teach 3rd Grade at Lakeside Elementary in Pittsburg, KS. He continued his education and earned a Master’s Degree in Elementary Education. In 2004 he earned a certification in ESOL (English Speakers of Other Languages) and an EDS in Higher Education. He served in several different teaching positions in Pittsburg, KS retiring as a 6th grade science teacher at Pittsburg Community Middle School in 2011. Survivors include his wife Joyce Elaine Anderson of Frontenac, KS; sons Chris Anderson and wife Sandra of Pittsburg, KS and Matt Anderson and wife Tara of Pittsburg, KS; grandchildren Greta Anderson, Christian Anderson, Lincoln Anderson and Liv Anderson; sister Kaitlyn Erin Sandberg of Kalamazoo, MI and numerous nieces and nephews. Mel was preceded in death by his parents, brothers Roger Anderson, Tom Anderson and grandparents Claude and Dena Sharp. Mass of Christian Burial will be 10:30am Monday August 23, 2021 at the Our Lady of Lourdes Catholic Church with Fr. Jerome Spexarth as celebrant. Burial will follow at the Ft. Scott National Cemetery in Ft. Scott, KS. Family will recite the rosary at 7:00pm Sunday August 22, 2021 at the Bath-Naylor Funeral Home in Pittsburg, KS; family will receive friends following the rosary from 7:30-8:30pm at the funeral home. In lieu of flowers the family asks expressions of sympathy to be in the form of memorials to St. Mary’s Colgan Elementary School Library and/or St. Jude’s Children Research Hospital. Friends may drop off or mail memorials to Bath-Naylor Funeral Home 522 S. Broadway Pittsburg, KS 66762. Condolences may be left at www.bathnaylor.com. Arrangements and services are under the direction of Bath-Naylor Funeral Home of Pittsburg, KS.

The family of Clarence Melvin "Mel" Anderson created this Life Tributes page to make it easy to share your memories.

Send flowers to the Anderson family.