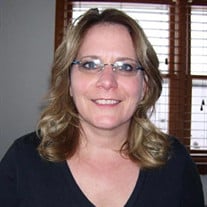 PITTSBURG, KS – Cindy Lou (Walker) Rushton, 47, of Pittsburg, died Thursday, November 10, 2016 at her home. She was born December 19, 1968 in Sioux Falls, SD the daughter of Daryl and Ida Mae Timm Walker. Cindy had been a resident of Pittsburg for 10 years, moving from Wichita. She was the Municipal Court Administrator for the City of Pittsburg for six years, prior to that she was the advertising department manager for the Pittsburg Morning Sun and the Wichita Eagle Newspapers. Membership was held in the Pittsburg American Legion Auxiliary, the VFW Auxiliary, National Rifle Association and ABATE of Kansas. She was also a Harley Davidson enthusiast, along with her fiancé Jason Denney. Cindy was always the caretaker of her circle of friends. Survivors include her fiancé Jason Denney of the home in Pittsburg, one son Scotty Lutz of Lennox, SD, one daughter Suzanne Ferguson of Council Bluffs, Iowa, several brothers including Chris Walker, Kent Gutzmer, Tim Morrisey and Gary Walker, several sisters including Joni Langley, Sheri Gutzmer, and Kathy Thompson, three grandchildren Zane Ferguson, Kaidense Lutz and Blake Lutz, her four loving dogs German Shepherd Ida Mae, Aussie Shepherd Dyna, Beagle Rider and Tibetan Spaniel Joni. She was preceded in death by her parents, two sisters Barbara Eitrem and Belinda Gutzmer. Celebration of Life services will be 2 pm, Thursday, at the Bath-Naylor Funeral Home, 522 S. Broadway in Pittsburg, KS with the Rev. Adah Hutchcraft, officiating. The family will host a gathering immediately following services at Faces Saloon in Pittsburg and all friends are invited to attend and celebrate Cindy’s life. A memorial has been established to the SEK Humane Society or the Sioux Falls, SD Humane Society in care of the funeral home. Condolences may be left at our web site www.bathnaylor.com.

The family of Cindy Lou Rushton created this Life Tributes page to make it easy to share your memories.

Send flowers to the Rushton family.