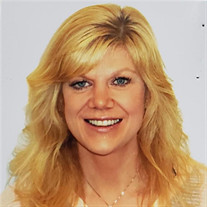 Cindy Kay Price 51, of Bartlesville, OK died August 29, 2020 at her home. Cindy was born June 30, 1969 in Casper, Wyoming the daughter of Frank Delano and Linda Kay (Winters) Reinier. She was a graduate of Arma High School. Although she lived in a number of places, she always considered Pittsburg her home. In the spring of 1991 Cindy married Mark Price in Pittsburg, KS. After they were united Mark and Cindy moved to Anchorage, Alaska and spent approximately 8 years there. During that time Cindy worked as a dental hygienist and Mark worked for a printing company. They spent their time raising their son, Jake. They later moved back to Pittsburg where Cindy began employment in sales type work. Cindy found she was good with people and had a knack for sales. She utilized those skills working for a number of different companies including Amini’s Galleria in Tulsa and Doenges Toyota in Bartlesville, Oklahoma. Cindy’s faith sustained her for many years after her son Jake’s passing and she lived in the hope that someday they would be reunited. Cindy loved people, understood their trials and when in need she became a devoted caregiver. She enjoyed music and playing darts with friends. Survivors include her former husband Mark Price of Pittsburg, KS; father Frank Reinier of Walnut, KS; siblings Rick Reinier of Walnut, KS and Angela Martin with husband David of Gentry, AR; nieces and nephews include Jason Reinier, Jonathan Martin with wife Autumn, Matthew Martin, Daniel Martin, Abigail Martin, Ryker Reinier and Angel Martin; additionally numerous aunts, uncles, and cousins. Cindy was preceded in death by her mother Linda Reinier, an infant brother Frank Reinier Jr. and her son Jake Price, who was her pride and joy. Private Burial will take place at Highland Park Cemetery in Pittsburg, KS. In lieu of flowers, the family asks that expressions of sympathy in the form of memorials be dropped off or mailed to the Bath-Naylor Funeral Home 522 S. Broadway Pittsburg, KS 66762. Condolences may also be left at www.bathnaylor.com. Arrangements and services are under the direction of Bath-Naylor Funeral Home of Pittsburg, KS.

Cindy Kay Price 51, of Bartlesville, OK died August 29, 2020 at her home. Cindy was born June 30, 1969 in Casper, Wyoming the daughter of Frank Delano and Linda Kay (Winters) Reinier. She was a graduate of Arma High School. Although she... View Obituary & Service Information

The family of Cindy Kay Price created this Life Tributes page to make it easy to share your memories.

Send flowers to the Price family.