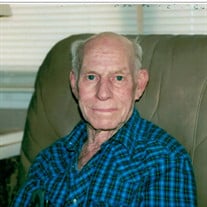 Charles Wesley Pulliam, 75, of Scammon, passed away Thursday, September 26, 2019 at his home in Scammon. A Celebration of Life Memorial Service will be held at 6:30 p.m., Monday, October 7 at the Tornado Shelter in Cherokee. A private family burial service will be held at the Cherokee Cemetery at a later date. Charles was born on January 4, 1944, to the home of Robert Burle & Gunelia (Dunbar) Pulliam. He attended elementary school in Cato, KS, and Aberdeen, Idaho, while his father worked on a wheat farm for a time; and then later graduated from Liberal High School, Liberal, MO. On May 29, 1964, he married Rita Marie Smith, of Liberal, MO, and together they had three children; Rodney Lynn, Charles Douglas, and Ronda Lee. He and his wife, Rita, farmed together their entire married life. Charles retired from McNally Mfg. where he dedicated over 40 years of service as a storeroom clerk and truck driver. He enjoyed Memorial Day and Labor Day weekends at Little Sahara State Park in Waynoka, Oklahoma with family and close friends riding the sand dunes in dune buggies and four wheelers; deer hunting; going to the shooting range; spending time at the casinos with friends; and playing games, particularly Dominos and Farkle, with his children and grandchildren. He is survived by his two sons, Rodney Pulliam (Karla), Charles “Doug” Pulliam (Kelly); and daughter, Ronda Coltrane (Jackie) all of Cherokee, KS; and his brother, Robert “Bob” Pulliam of Pittsburg, KS. He was blessed with seven grandchildren, Dallas Pulliam (Kayleigh), Kayla Pulliam, Cory Pulliam (Erica), Jordan Pulliam, Kelsie Natalini (Walker), Ashton Coltrane, and Jace Coltrane; and two great grandchildren, Reed Pulliam and Wyatt Natalini. He was preceded in death by his parents; and wife, Rita. It was Charles’s wish that donations be payable to the Southeast Trap & Skeet Club. These donations may be dropped off at Labette Bank or at the service.

Charles Wesley Pulliam, 75, of Scammon, passed away Thursday, September 26, 2019 at his home in Scammon. A Celebration of Life Memorial Service will be held at 6:30 p.m., Monday, October 7 at the Tornado Shelter in Cherokee. A private family... View Obituary & Service Information

The family of Charles Wesley Pulliam created this Life Tributes page to make it easy to share your memories.

Send flowers to the Pulliam family.