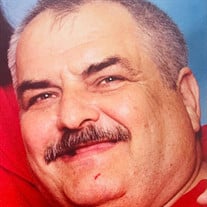 Charles E. Gibbs Jr. 74, of Pittsburg, KS died 2:50pm Thursday August 5, 2021 at the Via Christi Hospital. Charles was born January 18, 1947 in Linton, Indiana the son of Charles Edgar Sr. and Katherine Lucille (Fuqua) Gibbs. Charles has been a part of this community since 1984. Charles was a Veteran of United States Army serving his country in Vietnam from 1966-1968. On August 25, 1977 Charles married Ruby A. Rosete in Long Beach, California; she survives at the home. Charles worked as an over the road truck driver for 24 years. He later operated a bakery in Girard, KS; Owner and operator of Home Town Café at Farlington Lake; owner and operator with his family the Pie Hole in Girard, KS; in addition a chef at Celebrity’s in Girard, KS. His famous quote over the years working in food service, “Never Trust a Skinny Cook.” Charles also in his early years residing out in California was an extra in old western movies. Charles was a member of the Open Door Fellowship Church in Pittsburg, KS; was as an avid cook; was known to enjoy crab legs; most of all he loved his children and grandchildren. Survivors include his wife; daughters Connie Gibbs and husband Jeffrey Jenkins of Girard, KS and Susie Bell of Aurora, MO; grandchildren Makaihlah Stover and husband Chet, Jaylynn Jenkins, Alexis Jenkins, Charlotte Jenkins, Christian McCann, Jordan Gibbs, Jared Gallea, Victor Bell, Alyssa Gibbs, Cannon Loughmiller, Ava Loughmiller and Kamree Gibbs and several great-grandchildren. Charles was preceded in death by his parents and son Charles Edgar Gibbs III. Graveside Services will be 10:00am Thursday August 12, 2021 at the Girard City Cemetery in Girard, KS with Pastor Don Talent officiating. Family will receive friends from 7-8:00pm Wednesday August 11, 2021 at the Bath-Naylor Funeral Home. Condolences may be left at www.bathnaylor.com. Arrangements and services are under the direction of Bath-Naylor Funeral Home of Pittsburg, KS.

The family of Charles E. Gibbs Jr. created this Life Tributes page to make it easy to share your memories.

Send flowers to the Gibbs family.