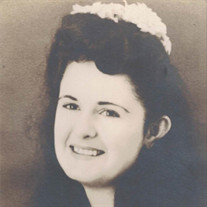 Caterina “Kay” (Poretta) Mahanes, 95, peacefully left the caring arms of her daughters and joined the loving arms of her husband, parents, sister, brother and many friends on May 3, 2020. She was born on September 6, 1924 in Arma, KS, the daughter of John and Teresa (Massa) Poretta. She lived most of her life in South East Kansas, not only was she a coal miner’s daughter but also a farmer’s daughter on a small family farm in 50 Camp. She and her mother delivered fresh milk daily to Pastories, a local grocery store in Arma for many years. In 1942 she worked in Detroit as “Rosie the Riveter.” One of women’s first economic opportunities. “Rosie the Riveter” is an icon and symbol of feminism. These women began replacing the male worker who joined the military. Women “war workers” riveted the B-17 aircraft in the collective effort of World War II. She worked beside her husband, Carl Mahanes, designing and building two homes. Together they had a small business called Kay’s Lures. Caterina hand tied fishing lures with deer hair and brilliant colored feathers for many years. She also beaded jewelry and strung glass beads to the age of 94. Caterina had many hobbies, cooking, canning, gardening, playing cards and dominos, camping and fishing. She loved planting numerous trees, so many that she acquired the nickname “Tree Lady”. She enjoyed traveling to Italy, New York, Montana and many trips to Colorado and Alaska. She was a devoted Mother, Grandmother and Great-Grandmother who will be deeply missed. Caterina is survived by two daughters; Teresa (Jim) Larsen of Eagle Rock, MO, Barbara Toschi of Mulberry, KS, three grandchildren; Holli (Tony) Papish of Olathe, KS, Shala Larsen of Saugatuck, MI, David (Amy) Jenkins of Weir, KS, three great-grandchildren; Ellie Barde and Sam Larsen of Saugatuck, MI, Jessie Jenkins of Weir, KS and a niece and nephew. She is preceded in death by her parents, husband, brother Dominic (Dorothy) Poretta and sister Joann (Clark) Fikes. No services are planned at this time, Caterina will be buried next to her husband at the Fort Scott National Cemetery at a later date. E-mail condolences may be left at www.bathnaylor.com. Arrangements are by the Bath-Naylor Funeral Home of Weir, KS

The family of Caterina "Kay" (Poretta) Mahanes created this Life Tributes page to make it easy to share your memories.

Send flowers to the Mahanes family.