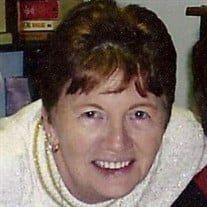 Bruna Faye Adamson 80, of Columbus, KS died 3:00am Sunday February 25, 2018 at the Mercy Hospital in Joplin, MO following an illness. Bruna was born October 2, 1937 in Calvin, OK the daughter of Clyde B. and Brunetta Agnes (Gilmer) Judy. She moved to Arkansas as a young girl growing up in Clifty, AR were she attended area schools. She later moved to the Columbus community working as a waitress at the City Café in Columbus, KS where she later met Norman Ellsworth Adamson. They later married on June 23, 1956 in Miami, OK; he preceded her in death on October 1, 2004. In Bruna’s early married years she worked for Big Smith Garment Factory in Columbus, KS where she served as a seamstress. She later briefly worked for Chimes making wind chimes in Oswego, KS. Finally she worked as a CNC machine operator at ACE Electric in Columbus, KS for 20 years before retiring. Bruna attended First Baptist Church in Columbus, KS; she loved her grandchildren, great-grandchildren, neices and nephews, bowling, camping, her vegetable garden, Branson, MO, casino hopping with friends and was known to be an accomplished seamstress and carpenter and a tough and determined woman who was known as "Mom" to all of her co-workers. Survivors include her children Norma F. Burnett and husband Jack of Miami, OK and Marla Oberzan and husband Mark of Scammon, KS; grandchildren Kraig W. Keely and wife Amanda of Miami, OK, Logan C. Glasgow of Pittsburg, KS, Chandler L. Glasgow of Pittsburg, KS; step-grandchildren Jackie Brunett of Miami, OK and Jessie Brunett and wife Amanda of Commerce, OK; 6 great-grandchildren; brothers Jerry Judy and Ronnie Judy of West Mineral, KS; sister-in-laws Marica Mathes and husband Bill of Columbus, KS, Sue Judy of Grove, OK and Janell Adamson of Grandview, MO and several nieces and nephews. Bruna was preceded in death by her husband, parents, 2 brothers Basil and Billy Judy. A Celebration of Life will be 6-7:00pm Monday March 5, 2018 at the Bath-Naylor Funeral Home in Columbus, KS. Private burial will take place at a later date at Edgmand Cemetery in Rural Columbus, KS. In lieu of flowers the family asks expressions of sympathy to be in the form of memorials to Bruna's daughters Norma and Marla in care of Norma Burnett to help with final expenses. Friends may drop off or mail memorials to the Bath-Naylor Funeral Home 611 S. East Ave. Columbus, KS 66725. Condolences may be left at www.bathnaylor.com. Arrangements and services are under the direction of Bath-Naylor Funeral Home of Columbus, KS.

Bruna Faye Adamson 80, of Columbus, KS died 3:00am Sunday February 25, 2018 at the Mercy Hospital in Joplin, MO following an illness. Bruna was born October 2, 1937 in Calvin, OK the daughter of Clyde B. and Brunetta Agnes (Gilmer) Judy. She... View Obituary & Service Information

The family of Bruna Faye Adamson created this Life Tributes page to make it easy to share your memories.

Send flowers to the Adamson family.