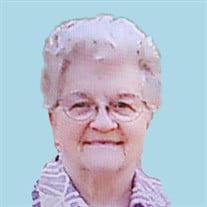 Bonnie Lea Carrier, 82, of Council Grove, Kansas, died August 28, 2017 at Heartsworth House of Vinita, Oklahoma. She was born September 25, 1934 in Savonburg, Kansas the daughter of Kenneth and Liane Wisberg Swanson. She had lived in Vinita for four months, moving from Council Grove, KS. She married Andrew A. Carrier on June 14, 1952 in Moran, Kansas. He preceded her in death on November 24, 2001. Mrs. Carrier worked as a secretary for the Heilman Law office, H&R Block and the Morris County Courthouse, all in Council Grove, Kansas, prior to her retirement. She was a member of the United Methodist Church and the VFW Auxiliary both in Council Grove, Kansas. Survivors include one daughter Linda A. Krause of Fredonia, Kansas, two sons Andy R. Carrier his wife Debbie and their three children Skylar, Drew and Kailea of Olathe, Kansas and Gary L. Carrier his wife Jodee and their two children Kyle and Brooklynn of Vinita, Oklahoma. She was preceded in death by her parents. Funeral services will be 2:30pm, Thursday, August 31, 2017 at the Friskel Funeral Home, 230 E. McKay in Frontenac, Kansas with the Rev. Dale Samuels of the Living Faith Church of Girard, KS, officiating. The family will receive their friends from 1:30 pm until service time Thursday at the funeral home. Pallbearers will be Kyle Carrier, Drew Carrier, Mark Hughey, Allen Head, Clay Starr and Brent Deacon. Burial will be in the Garden of Memories Cemetery, Pittsburg, KS. A memorial has been established to the United Methodist Church in Council Grove, Kansas in care of the funeral home. Condolences may be left at our web site www.friskelfuneralhome.com.

Bonnie Lea Carrier, 82, of Council Grove, Kansas, died August 28, 2017 at Heartsworth House of Vinita, Oklahoma. She was born September 25, 1934 in Savonburg, Kansas the daughter of Kenneth and Liane Wisberg Swanson. She had lived in Vinita... View Obituary & Service Information

The family of Bonnie Lea Carrier created this Life Tributes page to make it easy to share your memories.

Send flowers to the Carrier family.