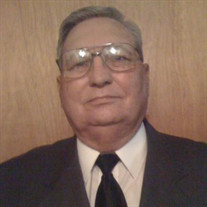 Bobby Ray Cypert passed away at the age of 84, Tuesday, June 23, 2020. Bobby was born January 19, 1936 in Prue, OK to Fred Newton and Ethel Mae (Joice) Cypert. He was raised in Broken Arrow, OK, but live the last forty-five years split between Columbus, KS and the family lake house in Yonkers, OK. Bobby graduated from Broken Arrow High School with the class of 1955, He received All-Conference in three sports and was highly sought by colleges, but due to an injury his athletic career was cut short. He was also a member of the Naval Reserve during high school and his first two years at Northeastern State University where he decided to attend school to become a teacher and coach. After two years he was drafted into the US Army where he served in Germany as a Radio Teletype Operator working with the Air Force. He was awarded a Code of Conduct Medal during his service. At the end of his service in the Army, he returned to NSU to complete his education. He then taught and coached in Paradise, KS, Preston, KS, and Collinsville, OK. After receiving a Masters Degree in counseling he became a school counselor in Howard, KS. He then finished his career as an educator in Columbus, KS as an assistant principal at the high school for 23 years. He spent his life working with students because he loved kids! He gave 37 years of his life to students. He thoroughly enjoyed his time in Columbus where he found a great home for his family, awesome school district, and lots of friends. When he retired he said he wanted to be remember as “the sweet guy that I am”. After Retirement in 1998, Bobby spent most of his time in Oklahoma fishing, hunting, and traveling with is family. Bobby was a member of the NRA, Broken Arrow High School Alumni Association, Northeastern State University Alumni Association, Masonic Hope Lodge #155 in Howard, KS, the Methodist Church, and was inducted in the Broken Arrow High School Athletic Hall of Fame in 2013. Bobby married his high school sweetheart, Susanne (Sudie) Sherrell, December 27, 1958 in Broken Arrow, OK. She survives. Additional survivors include one son, Kevin Cypert and wife Maria, Mounds, OK, one daughter, Karla Cypert, Miami, OK, three grandchildren, one great-grandchild, one brother, Gib Cypert, Lost City, OK, several nieces and nephews, and one very special family friend, his partner in crime, Meghann Hill, Miami, OK. Bobby was preceded in death by his parents, Fred and Ethel (Joice) Cypert and one brother Ronnie Cypert. Due to COVID-19 the visitation will be a drive through on Sunday, July 5, 2020 from 1 to 3 PM. Please drive down Titan Alley and share your favorite memory of Bobby Cypert with his family. Grave side services will be at Haner-Adair Cemetery, Murphy, OK - Date Pending.

Bobby Ray Cypert passed away at the age of 84, Tuesday, June 23, 2020. Bobby was born January 19, 1936 in Prue, OK to Fred Newton and Ethel Mae (Joice) Cypert. He was raised in Broken Arrow, OK, but live the last forty-five years split between... View Obituary & Service Information

The family of Bobby Ray Cypert created this Life Tributes page to make it easy to share your memories.

Bobby Ray Cypert passed away at the age of 84, Tuesday, June...

Send flowers to the Cypert family.