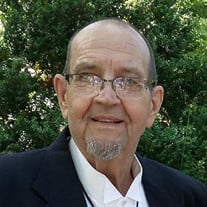 Billy E. Gravitt 79, of Scammon, KS died 11:20am Wednesday December 12, 2018 at the Medicalodge Nursing Home in Columbus, KS following an illness. Billy was born April 9, 1939 in Harrisburg, Missouri the son of Floyd and Minnie E. (Bruce) Gravett. Billy has been a part of this community since 1967 moving from Kansas City, KS. Billy was a graduate of Turner High School in Turner, KS. He later served his country in the United States Airforce. On April 1, 1961 Billy married Kathleen R. Kelly in Kansas City, KS; she survives at the home. Billy worked in his life in many fields including as a welder, draftsman, farmer, chef and maybe most remembered as owner and operator of Pizza Place on the square Columbus, KS. Billy was of the Christian Faith; he enjoyed painting, crafts, reading and was known to have read the bible cover to cover two times. Survivors include his wife; children Todd Gravitt and wife Donna of Roseland, KS, Linda Gravitt of Goochland, VA and Karen Gravitt Fleck of Pittsburg, KS; grandchildren Brandon Gravitt, Keyvin Gravitt, Kayla Woods, Amanda Woods, Curtis Fleck, Jacob Fleck and Brady Fleck; several great-grandchildren, nieces and nephews. Billy was preceded in death by his parents, brother Jerry Gravett and sisters Cherry Gravett and Sandy Benavento. A Celebration of Life will be 6-7:00pm Monday December 17, 2018 at the Bath-Naylor Funeral Home in Columbus, KS. Burial will be at a private date at Hosey Hill Cemetery in Weir, KS. Condolences may be left at www.bathnaylor.com. Arrangements are by Bath-Naylor Funeral Home of Columbus, KS.

The family of Billy E. Gravitt created this Life Tributes page to make it easy to share your memories.

Send flowers to the Gravitt family.