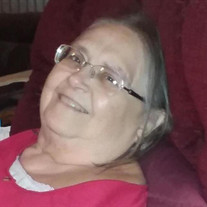 Beverly Anne Largent, 75, of Pittsburg, KS, passed away Saturday, May 5, 2018, at Via Christi Hospital in Pittsburg, KS. Beverly was born on June 9, 1942, the daughter of Frank C. Johnson and Marian L. (Hurst) Johnson. She was a graduate of College High school and Wayne State College before she went on to teach music in Frontenac, KS for 11 years. She was a member of the First United Methodist Church of Pittsburg, along with many other organization including the Sweet Adelines, Boy Scout Council Board Member, Red Cross Board Member, NEA, KNEA, FTA, Kappa Delta Pi, Treble Clef Club and PEA of Nebraska. She was passionate about the Red Cross and Boy Scout’s Council, but most of all she had a love for teaching music. You could find Beverly having breakfast or reminiscing with friends at Otto’s Café in Pittsburg, where she spent most of her time as a child at her dad’s restaurant. Beverly is survived by her mother, Marian Johnson; son, Patrick Marshall of West Palm Beach, FL; daughter, Glennis Peck of Pittsburg, KS; son, Jeremy Marshall of Frontenac, KS; daughter, Mindi Dorsey of Pittsburg, KS; Brothers, Darryl Johnson of Leavenworth, KS and Steven Johnson of Pittsburg, KS; five grandchildren; 3 great-grandchildren, with one on the way; and her dog, Cody Bear. Beverly was preceded in death by her daughter, Korina Gay Dale; father, Frank C. Johnson; grandson, Alonzo Dorsey; and her beloved dog, Misty. Memorial Services will be 2 P.M. Friday, May 11, 2018, at the First United Methodist Church in Pittsburg, KS. Memorials may be made to the American Red Cross. Condolences may be left at www.bathnaylor.com. Services are under the direction of the Bath-Naylor Funeral Home of Pittsburg.

Beverly Anne Largent, 75, of Pittsburg, KS, passed away Saturday, May 5, 2018, at Via Christi Hospital in Pittsburg, KS. Beverly was born on June 9, 1942, the daughter of Frank C. Johnson and Marian L. (Hurst) Johnson. She was a graduate of... View Obituary & Service Information

The family of Beverly Anne Largent created this Life Tributes page to make it easy to share your memories.

Send flowers to the Largent family.