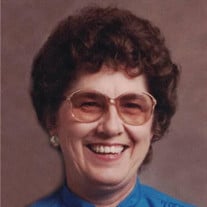 Betty Jo (Fletcher, Ross) York was born March 21st 1934 and died August 17, 2019. She was preceded in death by her parents Neal Fletcher and Marie (Aubert) Fletcher. She was also preceded in death by a brother Roy Fletcher and a twin sister Shirley Ann (Fletcher) Eckhardt. She married Samuel (Sammie) C. Ross in 1953 who died in 1984. They were blessed with three daughters. Angie Rippel married to Ronnie Rippel, with grandsons - Kenny and Kristy Rippel, Neal and Jennifer Rippel, Will Rippel, Wade and Rachael Rippel. Daughter Sue Proffet married to Terry Proffett, with granddaughters Nichole and Aaron Conard, Renae Peine, grandson Tyler Downs and Kacie O'Shea, and daughter Jan King , with grandsons - Joey Carlson, Chas and Amy Carlson, Ross and Charla King, Clay King and Lance King. She married Robert (Bob) York in 2000. He survives at the home. She gained a Step-daughter, Julie Davidson and step-granddaughter Sarah and Chris Teo, Janet and Drew Crisler , and step-grandson Micah Davidson, Step-son, Gene York who preceded her in death, and step-grandsons Chris York and Brad York. Betty has 15 Great Grandchildren with 2 more on the way. 15 step-great grandchildren, and 1 step-Great, Great grandchild. Betty attended Mound School, Crestline School, and Columbus High School, and graduated Business College. During her younger years, she was a member of a band that played for various community events and dances. She was a secretary at Empire District for 3 years while living at home with her folks while Sammie was overseas during the Korean Siege. They moved into their first family home together in Carl Junction, MO. In 1957 they purchased the Orville Eckhardt farm, her forever home. Betty became a homemaker and Sammie worked two jobs, farming and public works as a welder to make ends meet. Through the years Betty was a member of the Lawton Christian Church, where she taught Sunday School, was the Church Pianist, and was very involved in Vacation Bible Schools. During their girls' High School years, Sammie and Betty hosted several weekend impromptu events at their home arena for local youth. They were members of the Registered Yorkshire Association, the Registered Angus Association, Registered Texas Longhorn Association, member of the CCLIA, and the Registered Shetland Sheepdog Association. As a youngster she was a 4-H member active in swine, foods, and sewing. She later became a leader, parliamentarian and safety leader of Glittering Stones 4-H Club and project leader for various projects. She was active in Spencer School events where the girls attended, and was PTO president for several years. Betty was an active supporter of her daughters and grandchildren in their interest of horseback riding, following them to many fairs. She loved to sew, can foods, plant flowers and take care of her yard, home and family. She also took care of her father, and mother-in-law in her home. Every birthday, anniversary, or graduation card always had XXX OOO meaning Hugs and Kisses. Betty and Sammie purchased B & D Welding Company in the early 1980's. But due to Sammie's declining health, decided to sell the business and focus on the farm. After marrying Bob York, they farmed and raised cattle until retirement but still raised Shetland Sheep Dogs. Betty continued attending Lawton Baptist Church until her death. Betty never met a stranger and loved talking to people. Funeral services will be held on Saturday, August 24, 2019 at 10 a.m. at the Bath-Naylor Funeral Home, 522 S. Broadway, Pittsburg, KS. Burial will follow at Bird Cemetery. The family will receive friends at the funeral home from 6:30 to 8pm on Friday, August 23, 2019. Condolences may be left at www.bathnaylor.com. Arrangements and services are under the direction of Bath-Naylor Funeral Home of Pittsburg, KS.

The family of Betty Jo York created this Life Tributes page to make it easy to share your memories.

Send flowers to the York family.