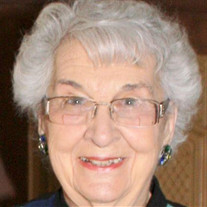 Betty Laswell died May 23, 2021 at the age of 99 at Autumn Place Assisted Living, Columbus, KS. She was born November 10, 1921 in Joplin, MO the daughter of Ted and Anna Lusher. On May 25, 1944, Betty married Woody Laswell. He preceded her in death on April 25, 1991. Betty was baptized at nine years of age at the First Baptist Church in Miami, OK where her family lived at that time. At the time of her death, she was a member of Center Christian Church, Columbus, KS. She was very fond of Pastor Tom Goettel and wife, Evon. Loving them all, she felt very blessed to worship with her brothers and sisters at Center Christian Church. After graduating from high school in Kansas City, MO, Betty pursued her interests in education and business, obtaining certificates in both areas. For a short period of time, she taught elementary school prior to beginning her professional career in the business field. The position Betty will most likely be remembered for was serving as the Executive Director of the Chamber of Commerce. She always credited her boards of directors and committee members with making the Columbus community the success it was during her tenure. Throughout her years in the Columbus community, Betty was very active in many organizations, serving in leadership and committee positions. She was honored to be chosen as a recipient of the "Chris Columbus Award", and on her 90th birthday, then Mayor Marie Nepple signed a proclamation honoring Betty with the "Key to the City." Longtime friend and neighbor, Ivan Collins, made the presentation to Betty. She felt very humbled to receive both awards. In her later years, Betty enjoyed attending the Retired School Personnel meetings and fellowshipping with friends in the "Merry Hearts Club," founded and hosted by Linda Jackson. As a true Patriot of this great Nation, Betty was proud to be a DAR member of Three Trails West Chapter, Stilwell, KS. In 2021, Betty began writing a weekly column for the Columbus News-Report, "Generations." Her goal for writing the columns was to uplift and encourage readers, if needed, and to express her love for, both, her hometown and friends. Betty was also a loyal fan of "her boys in blue," Go Royals!, and of the Kansas City Chiefs, living long enough to see them win a NFL Championship! Survivors include two daughters, Patricia Wohlner, Kansas City, MO, and Jan Laswell Neal, Sun City West, AZ; Betty has three grandchildren, and spouses, three step-grandchildren, and spouses, numerous great-grandchildren, cousins, a nephew, and many beloved friends. She was preceded in death by her parents, Ted and Anna Lusher, a brother Ray Lusher, granddaughter, Beth Ann Hunter, and sons-in-law, John Neal and Pacey Wohlner. Funeral services will be held at Center Christian Church, Columbus, KS at 10:30 am, Thursday, May 27, 2021 with Tom Goettel officiating. Following the service, lunch will be served at Center Christian Church. Interment will follow at the Park Cemetery Columbus, KS. Condolences may be left at www.bathnaylor.com. Friends may call at the funeral home their own convenience from 9am until 5pm on Wednesday. Memorials may be made to Dream Big Little One; these may be left at or mailed to the funeral home. Arrangements by Bath-Naylor Funeral Home Columbus, KS.

Betty Laswell died May 23, 2021 at the age of 99 at Autumn Place Assisted Living, Columbus, KS. She was born November 10, 1921 in Joplin, MO the daughter of Ted and Anna Lusher. On May 25, 1944, Betty married Woody Laswell. He preceded her... View Obituary & Service Information

The family of Betty Laswell created this Life Tributes page to make it easy to share your memories.

Send flowers to the Laswell family.