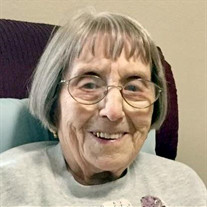 FRONTENAC – Beryl Shurley-Braden Harris died Tuesday, Nov. 27, 2018, at Oakview Estates Assisted Living Center in Frontenac. She was 103. Beryl was born June 30, 1915, in Cedar County, Mo., the daughter of Marion and Goldia Shurley. She was the oldest of seven children and grew up on a farm. Beryl was married in 1931 to Robert Braden and the couple farmed in Missouri until 1938, when they moved to Pittsburg where they purchased the Penny Exchange neighborhood grocery store. They operated the store until 1955. In addition, the couple also owned and operated a roller skating rink in Galena during the 1950s and the Pla-Mor roller rink on North Broadway in Pittsburg. Robert died in May 1977. The couple had six children: Joyce, Janice, Randall, Louis, Jeanmarie and Dawson. Their first-born, Ronald Glen, died in infancy while their oldest daughter, Joyce (Ernie) Clegg died in February 2000. Beryl married Melvin Harris in February 1982. The couple eventually moved to Toronto in 1995 where he was employed by the Kansas Department of Corrections. While living in Toronto, Beryl owned and operated The Village Shoppe antique and collectibles store. She was also a news correspondent for The Yates Center News. Following the closure of the Toronto Correctional Facility, Melvin joined The Coffey County Republican newspaper as an employee. The couple resided in Fort Scott before moving back to Pittsburg. The Harrises moved into Oakview Estates Assisted Living Center in October 2011. Melvin died May 10, 2016. Beryl once said after reaching 100 years of life: “My recommendation to young people is to stay busy and to be nice to others.” And to everyone, “My advice would be to treat others like you want to be treated and love the Lord with all your heart.” Beryl leaves five children, 10 grandchildren, 16 great-grandchildren, one great-great grandchild, and many friends and extended family. Funeral services will be held on Thursday, November 29, 2018 at 10 am at Bath Naylor Funeral Home, 522 S. Broadway in Pittsburg. Interment will follow at the Fort Scott National Cemetery in Fort Scott, Kansas. Services and arrangements are under the direction of the Bath-Naylor Funeral Home of Pittsburg, KS.

The family of Beryl Harris created this Life Tributes page to make it easy to share your memories.