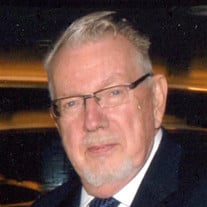 Bengtsen, Barry R (“B”), of Pittsburg, Kansas left the Great Stage of Life and returned to the Scene Shop; he was 80 years old. He passed on Monday, January 20, 2020 at Ascension Via Christi hospital in Pittsburg, KS surrounded by his loving family. He had multiple ailments that plagued his later life including Heart Disease and COPD. He was born in Newark NJ on December 27, 1939 to Carla (nee Hansen) and Clarence A Bengtsen and grew up in Livingston NJ. He is first generation American of Danish decent. He was a proud brother to younger sister Karen (Donald DeGenaro) of Eagan MN. He married Sharon L Bengtsen (nee Snyder) in Yankton SD on October 14,1962. They celebrated their 57th Anniversary of wedded bliss. They have two children: Colin of Pittsburg, Dr. Dana Malis of Overland Park KS, and two loving grandchildren, Owen, and Audrey, of whom he was especially proud. He also leaves a niece Kristine Solberg (Terry), a nephew Douglas DeGenaro (Laurel), grand nieces and nephews Charlie and Aimee (Eagan MN), twins Marten and Stella (Houston TX), and his brother-in-law Dr. Darrell Snyder (Beryllin) (Palos Park IL). In 1957 he graduated from Livingston HS, attended Penn State University, then graduated with a BA in theatre from Yankton College SD (’62), an MA in design from the University of Nebraska (’65) and post-graduate studies in theatre at the University of Kansas (’76-’79). He began employment at General Drafting Inc. (Convent Station NJ) as an ESSO mapmaker. He was then employed at Paterson State College in Wayne NJ as an Instructor/Technical Director of Theatre. In 1969 he moved his family to Kansas State College of Pittsburg (now PSU) as their Designer/Technical Director/Assistant Professor. For 32 years he taught thousands of graduate and undergraduate students in Performance Appreciation, 100+ students each semester. He was Summer Theatre Designer/Director of the Playhouse on Broadway from its inception (’71) to its demise (‘85). He particularly loved working with children in theatre productions, directing “Annie” and “The Wizard of Oz.” In 1986 he took it upon himself, to re-design a lecture hall and build the Studio Theatre in Grubbs Hall. As an international designer, he designed and taught at Barking College in London. He also designed in NJ, MO (Columbia) and KS (Lawrence), Missouri Repertory Theatre (KC REP), and community theatres-Topeka Civic and PCT to name a few. In his career he designed more than 130 theatrical performances. He is best known for his designs of Rashomon for Missouri Rep, Hamlet, Prince of Denmark and Chicago for Pitt State. He claimed many Awards including a Fulbright Exchange (England) and Outstanding Scenic/Lighting awards. He was chosen as 1 of 5 national academic designers to be in a Master Class with the outstanding film and set designer, Tony Walton (Chicago, Fahrenheit 451, Grand Hotel) at The Kennedy Center in Washington DC. He dabbled in acting/directing and was employed PT as an on-air radio announcer in Yankton (WNAX-CBS) and Pittsburg (KSEK) as “Brad Richards”. He is listed in Who’s Who in American Colleges and Universities. He retired from PSU as an Associate Professor Emeritus in 2001. Since retiring he has spent time completing his “bucket list:” Europe, Mexico, Panama Canal, Turkey and Egypt. He traveled to Overland Park and Eagan MN to visit family and yearly spent winters in Palm Desert CA. He was an avid desert/travel photographer. He is predeceased by his parents, in-laws his son-in-law Dr. Michael J. Malis, beloved pets Buffy, Jody, Eddy and Panther. Special thanks go to the doctors who gave him power over the last years of his life: Drs. Sandness, Sullivan, Marji, Bailey and Malis. No service is planned. Barry has chosen to be cremated and the cremains perhaps scattered at sea at a later time. Memorials may be made to the PSU Department of Communication (Theatre), KRPS-FM, or a local animal shelter; these may be left at or mailed to the funeral home. His final words are taken from the musical The Fantasticks, Henry (The Old Actor) says: “Remember me in light.” (exit stage right) Condolences may be left at www.bathnaylor.com. Cremation arrangements by Bath-Naylor Funeral Home 522 S. Broadway, Pittsburg, KS 66762

Bengtsen, Barry R (&#8220;B&#8221;), of Pittsburg, Kansas left the Great Stage of Life and returned to the Scene Shop; he was 80 years old. He passed on Monday, January 20, 2020 at Ascension Via Christi hospital in Pittsburg, KS surrounded by... View Obituary & Service Information

The family of Barry R. Bengtsen created this Life Tributes page to make it easy to share your memories.

Send flowers to the Bengtsen family.