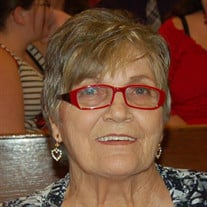 Barbara E. Wilson, 78 of Weir, KS died Thursday, February 24, 2022 at the Ascension Via Christi Hospital in Pittsburg, KS. She was born January 15, 1944 in Pittsburg, KS the daughter of Ernest and Frances (Fleeman) Kennedy. She attended and graduated from Pittsburg High School. On December 9, 1961 she was united in marriage to Lonnie J. Wilson in Miami, OK; he preceded her in death on April 20, 2016. Barbara worked at Via Christi Hospital in Pittsburg as an insurance claims specialist; she also worked at Ramsey’s and Simone’s Market in Weir. She was a member of the First Baptist Church of Cherokee. Survivors include a son Joey (Jeanette) of Weir; two daughters: Laura Burton of Boulder, CO and Molly (AI) Leonard of Cherokee, KS; four step-sons: Gary (Christine) Wilson of Weir, Ron (Shirley) Wilson, Jackie (Sammie) Wilson both of Lee’s Summit, MO, Lonnie (Sherrie) Wilson of Kansas City, KS; a sister Shirley Wyrick of Pittsburg along with numerous grand and great grandchildren nieces and nephews. Barbara was a loving grandmother, never missing an opportunity to gather an ever growing family for holidays. She was witty, funny and giving. She will be dearly missed by all who love her. She was preceded in death by her parents, husband, three sisters: Betty Burke, Frances Lemon and Floya Jones and a brother Jack Curtis. Graveside services will be 1pm, Saturday February 26, 2022 at the Rosebank Cemetery in Mulberry, KS with Gary Wilson officiating. The family will receive friends at the Bath-Naylor Funeral Home in Weir from 11am until 12 noon. Friends are requested to meet at the cemetery for the services. Condolences may be left at www.bathnaylor.com. Memorials may be made to the SEK Humane Society, these may be mailed to or left at the funeral home. Services are under the direction of the Bath-Naylor Funeral Home of Weir.

Barbara E. Wilson, 78 of Weir, KS died Thursday, February 24, 2022 at the Ascension Via Christi Hospital in Pittsburg, KS. She was born January 15, 1944 in Pittsburg, KS the daughter of Ernest and Frances (Fleeman) Kennedy. She attended and... View Obituary & Service Information

The family of Barbara E Wilson created this Life Tributes page to make it easy to share your memories.

Send flowers to the Wilson family.