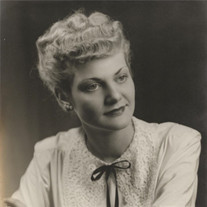 Precious mother Audrey L. “Gabby” Westervelt, 91 of Columbus passed away at 2:38 pm Thursday, January 18, 2018 at the Medicalodge of Columbus. She was born August 21, 1926 in Neutral, KS the daughter of James O. “J.O.” and Lucille (Auman) Roam. On October 10, 1948 she was united in marriage to James E. Westervelt in Columbus; he preceded her in death on August 29, 2013. She worked in the Register of Deeds office for Cherokee County for 25 years and served as Register of Deeds for several of those years. Audrey was a longtime member of the RLDS Community of Christ Church in Scammon and a member of the Child Study Club. She was also an avid square dancer and bowler. Survivors include a daughter Jan and son-in-law Paul Allen of Columbus, a sister Edith “Edo” Baumback; along with two grandchildren: Matt Allen (wife Jill) of Overland Park, KS, Mindy (Allen) Vance (husband Jason) of Houston, Texas, and five great grandchildren. She was preceded in death by her parents, husband, six sisters: an infant, Donna Marie Roam, Joan Gardner, Barbara Messer, Bonnie Teel, Vivian (Diz) Roam, Lois Jones and a brother: Dean Roam. Funeral services will be held at 2:00 pm, Monday, January 22, 2018 at Bath Naylor Funeral Home in Columbus with Elder Larry Reynolds officiating. Burial will follow in the Park Cemetery. Visitation will be from 3:00 pm to 5:00 pm on Sunday, January 21 at the funeral home in Columbus. Condolences may be left at www.bathnaylor.com. Memorial contributions can be made to the Medicalodge Activity Fund; these may be left at or mailed to the funeral home. Arrangements are under the care and direction of Bath Naylor Funeral Home, Columbus, Kansas.

The family of Audrey L. Westervelt created this Life Tributes page to make it easy to share your memories.

Send flowers to the Westervelt family.