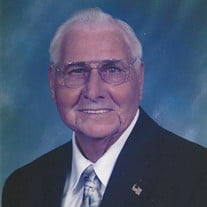 Armound Richard “Dick” Casey, 91, passed away Wednesday, October 10, 2018, at Via Christi Hospital in Pittsburg, KS after an extended illness. He was born November 18, 1926 in Pollock, LA, the son of Richard Ransom and Ida Mae (Collins) Casey. In November 1944 he enlisted in the US Navy and served 10 years, completing two world tours. He fought in both World War II and the Korean War. On August 31, 1952, Dick married Jaqueline R. Grubbs in Canon City, CO. Following his honorable discharge, he graduated from Universal Television System School in Kansas City, MO in October, 1955. The following month he completed additional training for color television, which was a new technology. He then established Broadway Electronics with his father-in-law, Claire Grubbs. He remained as active owner/operator until his death with his son, Rick. It was both his work and hobby as he thoroughly enjoyed working with customers and his many friends. Dick was a member of the First United Methodist Church, Eastern Star, life time member of the American Legion Post 64 and VFW Post 1158, USS James C Owens Association, and various Masonic and Shrine organizations, including Mirza Color Guard, Past President of Mirza Uniformed Units, Legion of Honor, and Mirza Hospital Dads, driving hundreds of thousands of miles taking crippled children to Shriners Hospitals. From 1964 to 1971 he served as Cub Scout Master for Pack 151 and then Assistant Scout Master for Troop 151. He also served as a reserve police officer for the City of Pittsburg for 14 years. Survivors include his wife, Jacqueline, of the home; daughter, Jana Jones and her husband Larry of Frontenac; son, Rick Casey and his wife, Rebecca of Pittsburg; sister, Vivian Mayber of Pueblo, CO; brothers Vernon Casey of San Jose, CA and Vance Casey of Manassa, CO; grandchildren, Christopher Bradley of Pittsburg and Ryan Bradley of Panama City Beach, FL, Jeni Crockett and her husband Bradley of Oronogo, MO, and Andrew Casey and his wife Cori of Overland Park, KS; and great grandchildren, Brenton and Gentry Crockett, and many nieces and nephews. He was preceded in death by his parents; brother, Leon Casey; and sisters, Emma Smith and Lillian Driebholz. Memorial Services will be held at 10:00 am, Tuesday, October 16, 2018, at Bath-Naylor Funeral Home in Pittsburg, Kansas. A private inurnment will be held on a later date at Garden of Memories in Pittsburg. The family will receive friends on Monday, October 15th, from 6 pm to 8 pm at Bath-Naylor Funeral Home. In lieu of flowers, memorials may be made to the Mirza Transportation Fund, the American Cancer Society, or the building and organ fund for the First United Methodist Church. Services and arrangements are under the direction of the Bath-Naylor Funeral Home of Pittsburg, Kansas.

The family of Armound Richard "Dick" Casey created this Life Tributes page to make it easy to share your memories.

Send flowers to the Casey family.