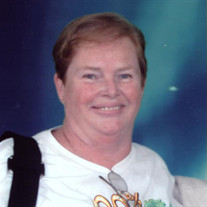 Anne E. Hyatt, 64, of Pittsburg, KS died Thursday December 28, 2017 at the Arma Care Center in Arma, KS following a prolonged illness. Anne was born October 2, 1953 in Dublin, Ireland, the daughter of Edward T. and Edythe C. (Williams) McNally. She was a lifelong resident of the area and was a graduate of Judson High School in Scottsdale, Arizona. She later received her B. S. Degree in Nursing at Pittsburg State University. On July 21, 1975 Anne married William H. Hyatt in Pittsburg, KS; he preceded her in death on December 29, 2010. Anne worked for Mt. Carmel Hospital in Pittsburg, KS as a nurse for most of her career. Anne was known to be very proud of her children and grandchildren, taught swimming for many years, loved dogs and horses, and took pride in teaching clinicals for Fort Scott Community College nursing students. Survivors include her children Dr. Clare Hyatt of Albuquerque, NM, Thomas Hyatt and wife Ashley of Pittsburg, KS; siblings Eileen Swearingen and husband Jim and Timothy McNally and wife Chris; grandchildren Dominic Hyatt, Shayne Leastman and Kassidy Leastman. She is also survived by Amy Crocker, Don and Judy McCabe and Steve and Regina Perry as well as numerous nieces and nephews. Anne was preceded in death by her husband, parents, siblings Peggy Harth, Tom McNally and Michael McNally. Per Anne’s wishes private ceremonies will take place at a later date. Condolences may be sent to www.bathnaylor.com. Arrangements are by Bath-Naylor Funeral Home of Pittsburg, KS.

The family of Anne E. Hyatt created this Life Tributes page to make it easy to share your memories.

Send flowers to the Hyatt family.