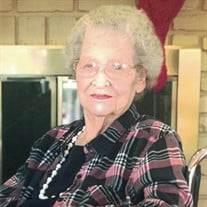 Anna Belle Woods, 96, of Arma, KS. died at Arma Health and Rehab, Monday, November 16th, 2020 at 8:00 a.m., where she had been living since July 5, 2016. She was born October 23, 1924, at Westville, OK to Bert and Amey Jones. Bert was a minister. Ann was the third of six children. She was united in marriage to Emmitt Wilson. He preceded her in death February 1986. She worked and lived in Bakersfield, CA while married to Emmitt. She worked in retails sales which she enjoyed. She married Alfred “Bud” Woods in January 1987 in Cherokee, KS. He preceded her in death November 2nd, 2016 at Arma Health and Rehab, Arma, KS. Her and Bud enjoyed traveling in their 29 years together, and lived in Weir, KS. Her step grandson, Reuben visited her most nights at the nursing home until covid. She was a member of First Baptist Church, Cherokee KS. She was preceded in death by her first husband, Emmett Wilson, 2nd husband, Bud Woods, sisters Ruth, Fleeta and brother Richard and stepson “Woody” Woods. She is survived by step children, Randy and Rene Woods, Arma, KS., Sherry and Wayne Landry of Harbor City, CA. Step-grandchildren Rodney, Charis Woods, Croweburg, KS., Randa Woods of Arma KS., Reuben and Kendra Woods of Arma, KS., Ron and Shayla Woods, Mulberry, KS., . Step Great Granddaughter Reagan Woods. Also surviving 2 sisters, Jeanne Doyle and Delores Smith of OK. Son, Gary Wilson and grandson, Archie of CA. Also, many nieces and nephews that she talked about. Special thanks to the staff at Arma Health and Rehab for her care. Graveside services will be held at 11 a.m. on Friday, November 20, 2020 at Hosey Hill Cemetery, Weir, KS. Pastors Ben Scott and Jamie Tickel officiating. Memorials may go to the First Baptist Church, Cherokee, KS and/or Arma Health and Rehab activity fund. E-mail condolences may be left at www.bathnaylor.com. Arrangements and services are under the direction of Bath-Naylor Funeral Home of Weir, KS.

The family of Anna Belle Woods created this Life Tributes page to make it easy to share your memories.

Send flowers to the Woods family.