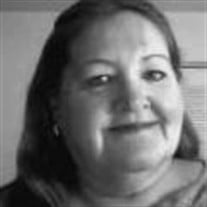 Ann Melyn (Roper-Harvill) Wilkins, 62, of Perry, FL passed away May 22, 2016. She had been in failing health for the past several years due to COPD. She was born February 16, 1954 in Tulsa, OK to the late Orville Edward & Sammy Lou Roper. Ann grew up and attended high school in Clear Lake, Texas. Ann was a former Pittsburg, KS resident and lived in several communities throughout her years, including Clear Lake, TX, The Woodlands, TX, Panama City Beach, FL and Perry, FL. Before failing health, she enjoyed knitting, crochet, needlepoint, writing & composing various songs to sing and play on her acoustic guitar. Ann also loved the ocean and being near palm trees. Ann is survived by an amazing friend and prior caregiver of several years: Patrick Surline of Panama City Beach, FL, her five children: son, Brian Scott Harvill and his wife, Angela, of Sioux Falls, SD, daughter, Megan Chichester and her husband, Tom, of Lawrence, KS, son, Marc Harvill and his wife, Heather, of Denver, CO, daughter, Brehan Harvill of Friona, TX, and son, Brett Clark of Panama City, FL. She is also survived by one older brother: Brett Roper, and his wife Diane, of Aurora, CO, niece: Delynn Allyn, and her husband, Joe, of Aurora, CO, one nephew: Jay and his wife, Trisha, Rhome, TX, and 13 grandchildren. She was preceded in death by her parents, O. Edward Roper & Sammy Lou Roper, and infant brother, Mark Edward Roper. On behalf of the family we extend a tremendous thank you to Marshall Health & Rehabilitation who provided daily comfort and care. Ann’s wishes were to be cremated. A private family memorial service will take place at a later date at Highland Park Cemetery in Pittsburg, KS. Condolences may be submitted online at www.bathnaylor.com. Memorials may be made to the American Lung Association or to the charity of your choice.

Ann Melyn (Roper-Harvill) Wilkins, 62, of Perry, FL passed away May 22, 2016. She had been in failing health for the past several years due to COPD. She was born February 16, 1954 in Tulsa, OK to the late Orville Edward & Sammy Lou Roper.... View Obituary & Service Information

The family of Ann Melyn (Roper-Harvill) Wilkins created this Life Tributes page to make it easy to share your memories.

Send flowers to the Wilkins family.