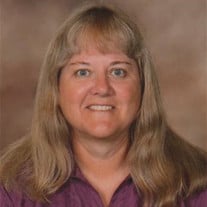 Anita Mae McColm, 58, of Columbus died Monday, July 29, 2019 at her home, surrounded by her family and friends, Anita known as “Coach “to many, lived her entire life in the Columbus area. Born in Columbus, January 15, 1961, Anita was the daughter of Charles L. and Margaret M. (McGown) McColm. She grew up and attended Columbus schools, graduating from Columbus Unified High School with the class of 1979. She was the class Salutatorian. She graduated from Pittsburg State University in1983 with a Bachelor of Science in Education, majoring in Physical Education and minoring in History. She received a Master of Science Degree in 2005. Anita taught in the Columbus School System teaching Physical Education Classes and coaching for 23 years. Due to health issues she retired in May of this year. As a young girl she was active in sports and 4-H. She was inducted into the 2019 Columbus Sports Hall of Fame. Anita played basketball, threw in track, and played tennis. Her high school basketball team won or shared the SEK League title three times and qualified for the state tournament. She was also known for being a member of the boy’s eighth grade basketball team. Anita placed in state in the softball throw and qualified for the discus. After walking on the Pittsburg State University track team her freshman year, she earned track scholarships during her junior and senior years. She set several track and field records in the javelin, discus, and shot put. Anita was the first woman in PSU history to earn four letters in track and field. Anita was a member of the First United Methodist Church of Columbus. She enjoyed sports and watching the Tennessee Lady Volunteer Basketball and Softball teams. She had become a friend of Kellie Harper the new Tennessee Coach. Anita enjoyed swimming in her pool, playing with her pets, spending time working outdoors, writing poems, and creating scrapbooks of her various trips. She had compiled extensive genealogy records of her family’s history. Anita is survived by her parents, Charles and Margaret McColm of rural Columbus and a sister Athena McColm of Columbus who had been taking care of her during her time of illness. Additionally, she is survived by several aunts, uncles, along with many cousins and numerous close friends. Anita touched many lives and her quick humor and many stories will be missed by many. A visitation with family members will take place Thursday, August 1, at the Bath Naylor Funeral Home, Columbus from 6:30 until 8 p.m. A celebration of life will be conducted Friday, August 2 at 10 a.m. at Bath-Naylor Funeral Home, in Columbus. Neal Anderson and Ron Johnson will officiate. Burial will take place following the service at the Park Cemetery in Columbus. In lieu of flowers memorials may be given to Columbus Girls Babe Ruth. Bath-Naylor Funeral Home is in charge of arrangements. Condolences may be left at www.bathnaylor.com.

The family of Anita Mae McColm created this Life Tributes page to make it easy to share your memories.

Send flowers to the McColm family.