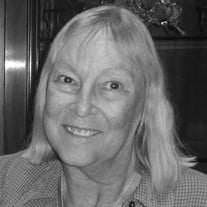 Amy Lou Stear passed away in Pittsburg, Kansas, on Sunday, July 16, 2017, with her sister by her side. She was born in Huntington, West Virginia, on November 1, 1954, the daughter of James William Stear and Mary Warren Stear of Huntington. Amy was predeceased by her son, James Shay Stear Swinford, who died in Milwaukee, Wisconsin; her brother, James Warren Stear; her parents, and several beloved aunts, uncles and cousin. Amy is survived by her daughter, Lucy Lee Stear Swinford, of Milwaukie, Wisconsin, her sister Linda Sue (Kent) Runyan of Pittsburg, Kansas, her uncle, Richard Jones of Moor Park, California, and several cousins including Rick (JoAnn) Corder, June (Russ) Gordon, and Leanne (Steve) Opritza. She also leaves behind a dear friend, Rachel Crites of Milwaukie. Amy is lovingly remembered by her nephews, Charles Keith (Stacy) Runyan and Jonathan Scott (Kasey) Runyan, and niece, Jaime Lynn (Jeff) Peterson. One of the joys of her later life was spending time with her great-nephews and nieces: Madison Elizabeth Runyan, Charles Ethan Runyan, James Daniel Peterson, Isaac Thomas Peterson, Clara Lynn Peterson, Kooper Warren Runyan, and Wylie Owen Runyan. Amy graduated from Huntington East High School in 1973 and Marshall University in 1980. She spent most of her professional life as a union organizer, always fighting for workers, protecting the poor and sick, and standing up for injustice, no matter how unpopular that stance. Amy worked as the Organizing Director for the United Healthcare Workers, District 1199, in Columbus, Ohio, from 1982 to 1989; the National Organizing Coordinator for the Service Employees International Union in Seattle, WA from 1990 to 1994; the Director of Organizing for the Oregon Public Employees Union, Local 503, in Portland, OR from 1994 to 1997; and the Wisconsin Director of 9 to 5, National Association of Working Women from 1997 to 2011. After moving to Pittsburg, Kansas, in 2011, Amy enjoyed traveling with her sister’s family, especially visiting the ghost hotels of Eureka Springs, Arkansas, and the attractions found in Branson, Missouri. Amy thoroughly enjoyed the “Girls’ Weekend Out” events when she traveled with her sister to the Kansas City area to shop and eat. If she couldn’t actually travel, she loved to shop online and find bargains! She was a wonderful cook and often prepared special treats for her sister’s fifth grade students, as well as created traditional holiday meals for her family. Amy could be counted on to help baby-sit her seven grand nieces and nephews. Her family and friends will remember that Amy was always up for lively political discussions, either around the dining room table or via the Internet. The family is truly appreciative of the medical guidance from Dr. John Taylor and Sean Anderson as well as Avalon Hospice. After two extended stays at Medicalodge South, the staff and residents were not only our support for Amy, but also became our friends. Cremation arrangements are under the direction of Bath-Naylor Funeral Home in Pittsburg, Kansas. There will be a celebration of life with family at a later date. In lieu of flowers, memorial donations may be made to your local food pantry or your favorite charity. Condolences may be expressed to the family at http://www.bathnaylor.com/condolences.html

Amy Lou Stear passed away in Pittsburg, Kansas, on Sunday, July 16, 2017, with her sister by her side. She was born in Huntington, West Virginia, on November 1, 1954, the daughter of James William Stear and Mary Warren Stear of Huntington. Amy... View Obituary & Service Information

The family of Amy Lou Stear created this Life Tributes page to make it easy to share your memories.

Send flowers to the Stear family.