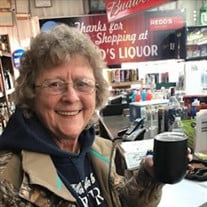 Amelia (Mimi) Warmbrodt Redd, 78, of Pittsburg, KS died at 7:00 am on Monday, October 25th, 2021 at her home surrounded by her children. She was born on July 9th, 1943 in Pittsburg to Floyd and Edna (Overfield) Warmbrodt. On December 16th, 1961 she was united in marriage to Lloyd (Dude) Redd in Pittsburg; he preceded her in death in July 2007. She was a member of Our Lady of Lourdes Catholic Church. Mimi was in the Pittsburg High School graduating class of 1961. Along with her husband, they built three homes and remodeled their first home together. Mimi performed all of the electrical work herself. She and her husband had also farmed and raised pigs until the early 1970s. Mimi’s proudest accomplishment was owning and successfully operating the oldest liquor store in town, Redd’s Retail Liquor, for the last 33 years. Her store had the first drive-through window in Southeast Kansas in 1994. She enjoyed spending time with her children, grandchildren, cooking large Sunday meals for family and friends, reading, fishing, shooting guns, and watching movies. People often joked that her home was Grand Central Station. She was very passionate about rescuing cats and dogs, and was proud to say that she helped spay and neuter countless animals within the community. Mimi was very much loved by her family and all of the friends who knew her. She will be sadly missed. Mimi is survived by her six children: Eric (Gena) Gregerson, Terri (Paul) Menchetti, Bill (Angela) Redd, Mark (Julie) Redd, Cindy (David) Frasco, and Susan (Robert) Russian, and grandchildren Ryan and Andrew Gregerson, Stephanie and Samantha Menchetti, Kristen and Beth Redd, Adam (Rendi), Lucas, and Taylor Redd, Chris Albers, Aaron (Maggie), Anna, and Macy Frasco, Jessica, Rachyl, and Jake Russian, and two great grandchildren, Brooklyn and Brayden Menchetti. The family suggests memorials be left to Pawprints on the Heartland, a non-profit organization, which provides low cost spaying/neutering for animals in the Southeast Kansas area. Memorials may be mailed to PO Box 644, Pittsburg, KS. There are no services planned at this time.

Amelia (Mimi) Warmbrodt Redd, 78, of Pittsburg, KS died at 7:00 am on Monday, October 25th, 2021 at her home surrounded by her children. She was born on July 9th, 1943 in Pittsburg to Floyd and Edna (Overfield) Warmbrodt. On December 16th,... View Obituary & Service Information

The family of Amelia (Mimi) Warmbrodt Redd created this Life Tributes page to make it easy to share your memories.