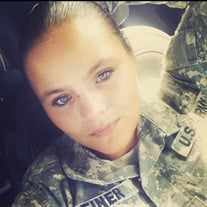 Alicia Marie (Moehlman) Breiner, 29 of Opolis, KS died June 7, 2016 in Girard, KS. She was born February 8, 1987 in Kansas City, MO to Mark and Deborah (Schooley) Moehlman. She attended Pittsburg schools and graduated from PHS with the Class of 2005 where she was active in the Marching Band, Flag Team, Debate and Forensics. In September 2009 she joined the U.S. Army. She served three years of Foreign Service and was awarded the Army Good Conduct Medal, National Defense Service Medal, Korea Defense Service Medal and the Overseas Service Ribbon. She was honorably discharged on May 31, 2016. On May 16, 2010 she was united in marriage to Shawn Breiner in Opolis, KS; he survives her of the home. Additional survivors include a daughter: Aryona Breiner of the home, mother Deborah Schooley of Opolis, father Mark Moehlman (Cynthia) of Bonner Springs, KS; a brother: Jerry Moehlman of Bellevue, NE; half brothers Adam Moehlman, Jason Moehlman, and half sister Emily (Moehlman) Kirk, Paternal Grandparents Jerry and Joanne Moehlman, Bonner Springs, KS. along with her family of In-Laws, Aunts, Uncles, nieces, nephews and cousins and her Brothers and Sisters in Arms. She was preceded in death by her maternal grandparents Gerald and Allene Schooley. Visitation will be held Wednesday Evening 6 to 8 pm June 15, 2016 at Bath-Naylor Funeral Home. Memorial services will be 11 am, Thursday, June 16, 2016 at the Bath-Naylor Funeral Home with Pastor Mike Wilkins officiating. Inurnment will follow at 12:30 at the National Cemetery in Ft. Scott, KS, where the Ft. Riley Funeral Honors Detail Team will provide Military Honors. Condolences may be left at www.bathnaylor.com. In lieu of flowers the family suggest contribution be made to a childhood savings fund being arranged for Aryona Breiner; these may be left at or mailed to the funeral home. Services by Bath-Naylor Funeral Home 522 S. Broadway, Pittsburg, KS.

The family of Alicia Marie Breiner created this Life Tributes page to make it easy to share your memories.

Send flowers to the Breiner family.