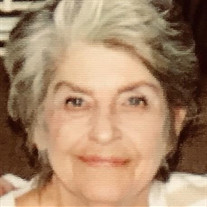 Alice Jean “Tootsie” Delmont, 74 of rural Columbus, KS died at 12:45am Tuesday April 2, 2019 at her home. She was born February 25, 1945 the daughter of Herman and Helen (Buzard) Schreiber. She was united in marriage to James Andrew Delmont, he preceded her in death. Tootsie was a member of the First Christian Church; she also enjoyed the Casino, outdoors, planting flowers. She was a lover of animals and liked the horse races, but her favorite was spending time with the kids, grandkids and great grandkids. She was a secretary for the Parsons, KS SRS office and also was a dog breeder. Survivors include a son Sam Delmont and wife Amanda of Columbus, KS; two daughters: Lela Mustain and husband Chad of Oswego, KS and Libby Perry and husband Heath of Columbus along with 16 grandchildren: Cody, Morgan, Alex, Molly, Haley, Shelby, Lainie, Allie, Rhett, Hunter, Paige, Caitlin, Kylee, Madison, Kyleigh, Kolten, 6 great-grandchildren and several nieces and nephews. She was preceded in death by her parents, husband, a daughter Lacy Delmont, 2 sisters: Marietta Slay, Lela Thomas and a niece Teri Byrd. Funeral services will be 1pm Friday, April 5, 2019 at the Bath-Naylor Funeral Home in Columbus with Pastor Shirley Poor officiating. Burial will follow in the Edgmand Cemetery. The family will receive friends at the funeral home from 6:30pm – 8:30pm on Thursday evening.

The family of Alice "Tootsie" Delmont created this Life Tributes page to make it easy to share your memories.

Send flowers to the Delmont family.