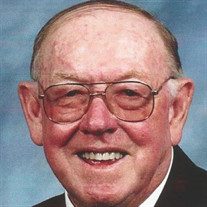 WEIR, KS – Alfred Isaac “Bud” Woods, 94, of Weir, died at 11:14am, on Wednesday, November 2, 2016 at Arma Health and Rehab in Arma, KS where he had been a resident since March 1, 2016. He was born December 1, 1921 in Weir, KS the son of George Thomas and Ella May Martin Woods. He was a graduate of Weir Elementary and High Schools. He served in the Army as a staff sergeant in the 193rd ordnance depot company from September 1942 to January of 1946. He was married to Thelma Mishler. They were later divorced. They had three children, Richard “Woody” Woods, deceased, Sherry (Wayne) Landry of Harbor City, CA and Randy (Rene) Woods of Arma, KS. Four grandchildren Rodney (Charis) Woods of Croweburg, Reuben, Ron and Randa Woods of Arma, KS and one step grandson Archie Wilson of Santa Rose, CA. He married Anna Wilson on January 8, 1986 and she survives at the home. Bud and Ann enjoyed traveling back and forth to California and Oklahoma. Step son Gary Wilson survives in Santa Rosa, CA. He worked at many jobs with the longest for Canteen, a vending machine company and as a sexton for Hosey Hill Cemetery for many years. He was a member of the First Baptist Church of Cherokee, KS and the Weir American Legion Post. He was a deacon since the start of the church and a Sunday school teacher until his health prevented him from doing it. He loved to play checkers with his grandchildren. He was preceded in death by his parents, son Woody, a brother Clarence Woods, a sister Claudine O’Neal. Funeral services will be 10 am Saturday at the Bath-Naylor Funeral Home in Weir, KS with the Rev. Ben Scott and Rev. Jamie Tickel officiating. Vocalist will be Pat Snow and Janice Tickel and the organist will be Debra Humble. Pallbearers will be Rodney Woods, Reuben Woods, Ron David Woods, Mike Thompson, Ron Virtue and Buddy Wood. Honorary pallbearer will be Jimmy Lovell. Burial will be in the Hosey Hill Cemetery in Weir, KS with full military honors. The family will receive friends from 6 to 7 pm Friday, November 4, 2016 at the Bath-Naylor Funeral Home in Weir, KS. A memorial has been established to the First Baptist Church of Cherokee or the Arma Health and Rehab in care of the funeral home. Condolences may be left at our web site www.bathnaylor.com.

The family of Alfred Isaac Woods created this Life Tributes page to make it easy to share your memories.

Send flowers to the Woods family.